To give you an idea of just how potent the deflationary phase of the 120-year Kress cycle is, look no further than Japan.

Japan’s Nikkei stock index peaked in 1989 and the country entered a bear market and deflationary depression lasting some 20 years.  Only in the last year or so has inflation finally shown signs of life after a record-breaking amount of liquidity created by the Bank of Japan.  Shinzo Abe, the architect of Japan’s re-inflationary monetary policy, has thrown everything but the kitchen sink at the country’s economy in hopes of fighting deflation.  As it stands the efforts have been only mildly successful by historical standards; indeed, Japan’s inflation rate is up only 1.4% from last year despite a 56% year-over-year increase in the monetary base.

As economist Ed Yardeni pointed out in a recent blog posting, Japan’s core Consumer Price Index (CPI) inflation rate has been positive for the past four months through January, when it was 0.6%.  “That’s still awfully low,” he writes, “but it beats the 55 consecutive months of negative readings from January 2009 through July 2013.”


When it takes this much money creation (see chart below) just to put a floor on deflation, you know the deflationary cycles are still coming down hard. 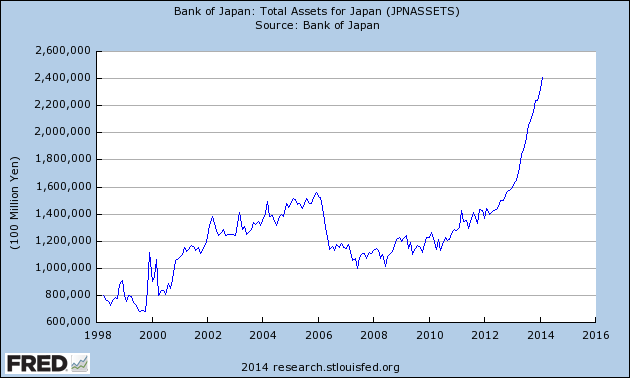