The price of copper demands our attention right now, especially given its historical ability to predict strength or weakness in the global economy.  Not surprisingly, Dr. Copper is particularly sensitive to the vagaries of China’s economy since China is its number one customer. Copper was 1.6% lower on Monday.  This followed an even bigger sell-off last Friday following news that China saw its first official corporate bond default, with Shanhai Chaori Solar Energy unable to pay its debt in full. 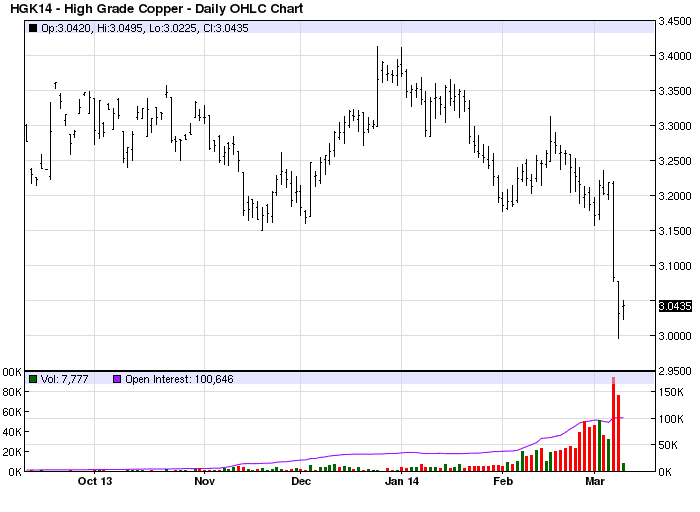 In Friday’s report I mentioned that the immediate trend for China stocks was still unsettled and that a move to new lows would likely be a cause for increased anxiety on Wall Street.  The Shanghai Composite Index chart shown below certainly provides a cause for this concern; as you can see the index is just barely above its previous low from mid January.  It won’t take much for this interim low to be violated, and if it happens it will undoubtedly be accompanied by great fanfare in the financial press.  This in turn could lead to spill-over selling pressure in the U.S. stock market….

China isn’t the only concern for stocks between now and the first week of April.  Russia’s geopolitical problems with Kiev could come to a head once again between now and then.  Keeping an eye on the Russia ETF (RSX) will be a prudent measure as we head closer to April.  Note that RSX is currently testing last week’s crash low; a new low in this ETF would signal more trouble ahead with possible spillover effect for U.S. equities.  Wall Street has always had a strange fixation on Russia.  You’d be surprised how much U.S. capital is invested in that country.  This is why trouble in Russia – be it currency-, economic- or politics-related, tends to roil U.S. equities.

[Excerpted from the Mar. 10 issue of Momentum Strategies Report]
Posted by Clif Droke at 12:44 PM