The past year has seen its fair share of worries.  From the China slowdown to the Brexit, successive waves of overseas fear have rolled onto our shores since 2015, yet none of them were the Tsunamis the bears had predicted.

The latest foreign fear concerns the possibility for a global credit crisis led by the collapse of a major international bank.  A simplified summary of this scenario goes something like this:  Deutsche Bank is on the brink of bankruptcy and its insolvency could spark a systemic European banking crash.  This in its turn could send shockwaves throughout the global financial system, resulting in widespread economic turmoil on par with the previous worldwide crisis.

Commentators who favor this outlook tend to illustrate their dire predictions with a graph of Deutsche Bank’s stock performance since last year.  It certainly adds a spark of credence to their argument based solely on the depth of the stock’s plunge.

One commentator has gone so far as to assert that “if Deutsche Bank goes under it will be Lehmen times five!”  Other observers have expressed a similar concern, albeit in less alarmist terms.  The International Monetary Fund (IMF) labeled Deutsche Bank as the most risky financial institution.  The argument goes that since Deutsche Bank is linked with other publicly traded banks and insurance companies, it has the potential to be the source of another worldwide financial contagion should the bank collapse.

In 2009, Deutsche Bank CEO Josef Ackermann assured investors that it had enough money to survive a crisis.  Three years later, however, some of his colleagues said bank hid €12 billion of operating losses with derivatives.  “The first warnings that Deutsche Bank could declare bankruptcy emerged in 2013 when the bank said it needed additional capital,” according to sputniknews.com.  “In 2013, it attracted $3 billion through issuing shares for its stakeholders.”

In March 2015, a stress test revealed that the bank again needed additional capital.  It was also revealed that the bank manipulated with LIBOR, and in April 2015 it was fined for $2.5 billion.  Subsequently, the ratings agency Standard & Poor’s downgraded Deutsche Bank from A to BBB+, three positions above the junk rating.

In early June 2016, Deutsche Bank was again involved in a scandal over LIBOR manipulation.  The case involved at least 29 personnel who worked in London, Frankfurt, Tokyo and New York.  Last year, Deutsche Bank reported a net loss of €6.8 billion for the first time since 2008.

Most recently, the bank made headlines last week when its Xetra-Gold exchange traded bond failed to deliver gold upon clients’ request.  This understandably sparked grave concern from many in the financial realm that Deutsche Bank’s back is against the ropes once again.

Could a Deutsche Bank collapse serve as the catalyst for a 2008-type global credit storm?  When analyzing this question one must be very careful from making dogmatic statements since no one (especially an outsider to the international banking industry) can possibly know all the variables involved.  There are, however, some guidelines that can help us understand the position of the broad market vis-à-vis the effects of an ailing global institution.   These guidelines should allow us to at least handicap the odds of a global financial meltdown.

One important guideline is the underlying strength and internal health of the financial market, notably the U.S. equity market.  In the months prior to the 2008 credit crash the U.S. stock market was exceedingly weak as evidenced by the sustained decline in NYSE internal momentum.  In fact, this is what the longer-term internal momentum indicator for the NYSE broad market looked like just prior to the 2008 collapse. 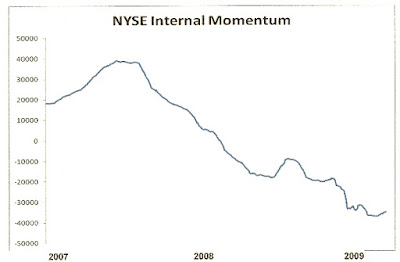 This internal weakness, combined with growing institutional weakness in almost all major sectors of the economy, meant that the U.S. was highly vulnerable to a financial shock.  When the Lehman Brothers collapse hit the market, the shockwaves were felt immediately and resulted in a domino effect.  In other words, internal weakness makes it far more likely that an exogenous shock to the system will prove devastating, if not fatal.

By contrast, an internally strong internal condition makes it far less likely that an exogenous event, such as the collapse of a giant bank, would derail the U.S. financial system.  Consider the experience of 1998 when the combination of the Asian currency crisis, the LTCM meltdown, and the near-collapse of the commodity market hit the U.S. stock market.  U.S. equities were in a raging bull market at that time and the financial market was internally strong.  The contagion hit our shores in the summer of ’98, and while it did briefly plunge the Dow and S&P into a malaise – within three months the major indices were off to the races again and finished out the year at new all-time highs.  The U.S. essentially shrugged off what would normally have been a catastrophic event due to its internal strength.

I would argue that the U.S. financial market finds itself in a similar situation today.  Instead of chronic weakness, the U.S. market is internally quite strong.  Witness the longer-term NYSE internal momentum indicator below.  As you can see, it’s in stunning contrast to the 2008 scenario shown above. 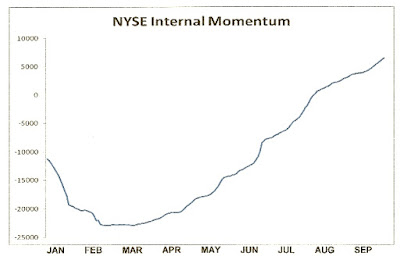 The late great historian and author Barbara Tuchman said it best when she wrote: “Social systems can survive a good deal of folly when circumstances are historically favorable, or when bungling is cushioned by large resources or absorbed by sheer size as in the United States during its period of expansion….[W]hen there are no more cushions, folly is less affordable.”


The “cushions” she mentions are in place and are in the form of the rising intermediate-term and longer-term internal momentum previously mentioned.  If a Deutsche Bank collapse happens in the coming months – a mere conjecture to be sure – it would be very unlikely to collapse the U.S. given the prevailing internal strength.
Posted by Clif Droke at 12:39 PM No comments: