Is the death of the U.S. bull market imminent?

A common refrain from commentators over the last year or so is that the bull market in U.S. equities is “long in the tooth.”  The very use of this phrase implies a market which has reached a stage of decrepitude from which only bad things can result.  “Long in the tooth,” in other words, implies the imminent demise of the bull and the birth of a new bear market.

But does an old bull market necessarily give rise to a bear market by virtue of its age?  Does old age in fact kill bulls?  A careful study of market history provides a negative answer to this question.  Old age doesn’t kill bull markets; in fact, it’s not uncommon for equity bull markets to last 8-9 years before they terminate.  For perspective, the present bull market has only just entered its sixth year.

If anything, age “mellows” a bull market in much the same way that it mellows wine.  The early phases of a new bull market are often characterized by wild volatility and uncertainty.  As market sage Richard Russell once observed, “The early stage of a bull market…always tests the nerves of the participants.  The bull will try to advance while attracting the fewest possible numbers of ‘riders.’”  That’s exactly what the U.S. equity bull market did in its infant stages between 2009 and 2011 (remember the infamous “Flash Crash”?)  Indeed, there weren’t many analysts who were willing to go on record in those years to proclaim that a new secular bull market was underway; most cautiously referred to it as a either a “cyclical” bull or an extended bear market rally.

The second half of a bull market (prior to the final “distribution phase”) is typically characterized by declining volatility and by a decisive upward bias that is all but impossible to ignore.  This what can be termed the “momentum phase” of a bull market.  It’s during this phase that retail investors come to accept the reality of the secular bull market and begin participating without the trepidation that characterized the bull’s early years.  Low volatility is absolutely necessary, from the standpoint of the insiders, to establishing the bull’s claim and luring the public into the market.  Without widespread public participation there can be no culmination of the bull market since the “smart money” has to have someone to sell to.

The proof that a secular (long-term) bull market had been birthed in 2009 wasn’t evident to the majority of investors until 2013.  It was during this year that the Dow and S&P 500 finally overcame their previous highs made in 2007.  Viewed another way, it was only two short years ago that the U.S. equity market reached the “break even” point from 2007.  The gains that have been made since then can be viewed as the “real” start of the momentum phase of the bull market.  At only two years of age, the momentum phase of the bull market has a ways to go before it gives way to the final stage of a secular bull market, namely the “distribution phase.”

No bull market can end until the distribution phase commences.  As the name implies, distribution involves the selling of equities by “smart money” participants who wish to finally cash out of what has been (for them) a long and profitable bull run.  Since they can’t sell to themselves, they must bring the public into the market in order to unload their holdings onto the unsuspecting small investor.  Distribution phases are always marked by glaring advertisements for stock ownership in the form of news articles in the popular press, TV shows, Internet advertising, etc.  The previous two bull markets which ended in the late 1990s and the mid-to-late 2000s, respectively, were characterized by this widespread advertising and public participation.

Currently, nothing even remotely similar to those two periods can be seen.  Today the average small investor is nowhere to be found.  Still feeling the psychological effects of the late credit crisis, he is in no hurry to leap back into an equity market which he believes to be “overvalued” and “long in the tooth.”  But before this bull expires you can rest assured Mr. and Mrs. Small Investor will once again rejoin the fray, just as they did before the culmination of all previous bull markets.  Before the public enters as active participants, the secular bull market will remain very much alive.

Returning to our original proposition, if old age doesn’t kill bull markets then what does?  If you listen to the opinions of most economists your answer would be that economic recessions kill bull markets.  That belief is of equally dubious merit, however.  There have been more than a few instances in history of recessions running concurrently with equity bull markets.  In fact, the recent experience in Japan late last year is a case in point.  Even though Japan experienced two consecutive quarters of economic contraction and officially entered a recession, the Nikkei stock market index remained very much in bull market territory (see chart below).  Conversely, there have been many cases in which an equity bear market precedes an economic recession, often by a lead time of several months or even up to a year.

In the final analysis, virtually every bull market in U.S. history met its demise due to a common factor: the Federal Reserve.  Fed policy is what kills bull markets in almost every instance.  The progressive increase in Fed interest rates and subsequent tightening of credit is what eventually chokes off demand for equities, thus culminating the bull’s run.  There’s even a Wall Street aphorism which attests to this: “Bull markets don’t end until the Fed removes the punch bowl.”  As long as Fed policy remains accommodative, the secular bull market will live on.

The last few months have been a time of consolidation for the stock market.  As measured by the NYSE Composite Index (NYA) the market has gone essentially nowhere for the 10 months.  To many investors this lack of forward progress may feel like a bear market, but it’s actually laying the foundation for the next phase of the bull market.  Think of the sideways range as a launching pad for the market’s next advancing phase, which in turn is necessary before the final distribution/ending phase can begin.

I make it a point to record the performance of the Momentum Strategies Report on a weekly basis.  I believe this is important for providing subscribers (and potential subscribers) with an accurate representation of how my recommendations have performed in the recent past.  Instead of posting the performance in the form of percentage gains/losses (as most newsletter do), the cumulative results are presented in the form of a simple line graph.  The old saying “charts don’t lie” applies in this case.

Below is the performance graph of the last 12 months.  It shows the cumulative performance of the stock and ETF recommendations made in the “Trading Positions” section of the Momentum Strategies Report. 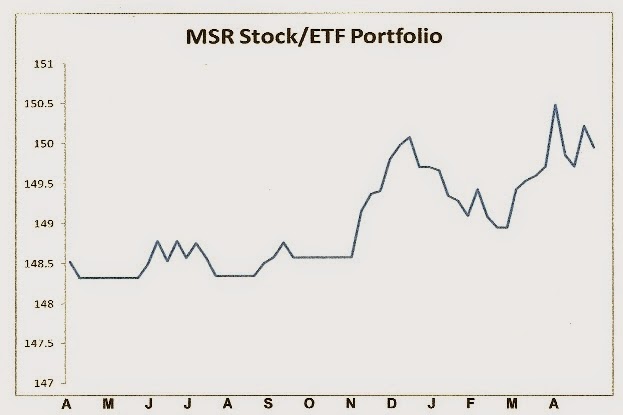 The above graph is an unvarnished reflection of how the recommendations made in MSR have performed since April 2014.  This performance was achieved, throughout most of the last year, by holding only a single stock or ETF position in the model portfolio.  While I’m not averse to recommending multiple trading positions, I felt that the market environment of the past year didn’t warrant the undue risk of holding several stocks or ETFs simultaneously due to the volatility risk inherent within a trading range market.

In summary, the trading system employed in the MSR newsletter is one of the most conservative, yet consistently reliable systems you will find in any stock market newsletter when it comes to delivering long-term gains without exposure to extreme volatility.  It’s based on the principle of making market commitments only when the odds are decisively in your favor.  Otherwise, a cash position is warranted in the name of capital preservation – the first commandment of the financial markets.

The latest earnings season begins this week as investors switch their focus from big-picture economic concerns to company-specific earnings reports.  The energy sector will receive most of Wall Street’s attention with analysts expecting oil/gas company revenues to drop by 64% on a year-over-year basis.

Earnings expectations for most sectors have been falling sharply in the last few weeks with the most recent estimate showing a 2.8 percent decline in earnings growth, mainly due to diminished expectations for the energy sector.

More than 80% of Q1 earnings pre-announcements for all sectors were negative, according to Thomson Reuters data.  As one writer pointed out, this sets the bar lower than is usually the case toward the start of earnings season.

Typically, about 63% of companies beat estimates while just 20% miss.  As one analyst observed, the negativity has set the bar so low for Q1, it may have set the stage for some positive earnings surprises.  With as much short interest that has built up in certain sectors in recent weeks, a series of positive earnings surprises could easily catalyze a short-covering rally and put the bears on the defensive.
Posted by Clif Droke at 1:40 PM