June was a very propitious month for trading recommendations in the Momentum Strategies Report.  The following graph shows the performance of our exchange-traded fund recommendation for June.  While we carried only one position this month – a computer services ETF – it outperformed the S&P 500 and gave us a worthwhile gain at a time when many investors were down for the month. 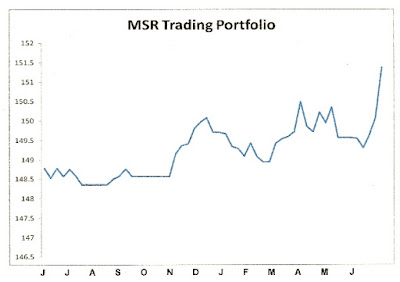 The key to this outperformance was our focus on relative strength and forward momentum – the two most critical factors to profiting in a secular bull market.  As long as the intermediate- and longer-term market trends are up, investors would do well to remember that relative strength is one of the most important things to look for in a potential trade set up.


Our technical indicators also allowed us to deftly sidestep the sharp decline which hit the broad market late in the month.  This again underscores the value in strictly adhering to a reliable trading discipline.  Technical analysis, when properly utilized, always trumps fundamental analysis.  A skilled practitioner who can combine both disciplines, however, will greatly augment his investment returns.

[For more info on MSR, visit the following link: http://www.clifdroke.com/subscribe_msr.mgi]
Posted by Clif Droke at 9:23 PM

Hanging like a millstone around the neck of the broad market has been the increasing number of new NYSE 52-week lows.  Most of these new lows are in the interest-rate-sensitive sectors, particularly muni-bond funds and ETFs.  The rally in Treasury yields has fed into this trend and is putting some outside pressure on equities.  However, there are still just enough pockets of strength to perhaps keep the major indices from breaking below their longer-term moving averages.  Financial sector stocks continue to show relative strength which suggests the current internal market correction will be relatively brief in duration.

Speaking of long-term trend lines, the 150-day (30-week) moving average for the SPX is about to be tested.  As I mentioned in previous reports, the 150-day MA is a critical longer-term trend line for the S&P which has served as a pivotal reversal point for several stock market declines of the last several years and has turned back each previous correction of the last six months.  The 150-day MA intersects the 2,071 level of the daily chart as you can see here.

The rising trend in Treasury yields has also exerted a negative impact on some other financial sensitive areas.  Corporate bond prices have plummeted in recent weeks as T-bond yields have rallied.  I’ve long noted the positive correlation between corporate bonds and stock markets; a weak corporate bond market could therefore weigh on equities in the near term.

Consider also the SPDR Barclays High Yield Bond ETF (JNK).  JNK tends to lead the SPX by several weeks; for instance, weakness in junk bonds often precedes stock market weakness while strength in junk bonds tends to anticipate stock market rallies.  The following graph compares the movements of JNK with the SPX.  Note especially the November-December 2014 decline in JNK, which led the S&P 500 to a sharp correction in mid-December.  The subsequence relative strength in JNK in January 2015 was a harbinger of strength for the SPX in February.

Right now the junk bond ETF is downward trending which sends a caution signal on the short-term broad market outlook.  Underscoring the short-term weakness is the bigger-than-normal new 52-week lows on the NYSE.  There were 128 new highs on Monday, which is a definite indication of internal weakness.  This weakness is being reflected in the short-term components of our NYSE Hi-Lo Momentum (HILMO) indicator shown here.  As I’ve emphasized in recent reports, until HILMO improves traders should embrace a cautious stance on stocks.


[Excerpted from the June 8, 2015 issue of MomentumStrategies Report.]
Posted by Clif Droke at 8:46 PM