Another look at the Year Five Phenomenon

Most investors are familiar with the Year Five Phenomenon, which assumes buoyant stock prices in the fifth year of the decade.  Yet few realize that there are also corollaries to this phenomenon, viz. a sluggish economy and negative investor sentiment.  All three aspects of the Year Five Phenomenon are a direct consequence of the 10-year cycle, which we’ll discuss in this issue of the report.

The 10-year cycle is the dominant directional cycle for equity prices.  Its influence can be seen clearly in most decades.  In the first half of the decade the cycle tends to create unusually volatile and choppy market conditions.  The second half of the decade, by contrast, is usually marked by steadily rising stock prices and often witnesses a runaway stock market.  Indeed, most stock market manias occur in the second half of the decade.  The reason for this is because the 10-year cycle bottoms at the end of the fourth year of the decade; the subsequent lifting of cyclical downside pressure in years five through nine accounts for the relentless bullish tendency of stock prices in most decades.

It can easily be seen then why stocks tend to rise in year five of the decade.  It’s also easy to see why investor sentiment tends to be bearish during the fifth year despite rising stock prices.  Negative psychology is a consequence of the volatility and slowing monetary velocity during the previous year in which the 10-year cycle bottoms.  It takes about 1-2 years for the typical investor to recognize a shift in the market tide.  Therefore the lack of juncture recognition on the part of most investors is apparent in the fifth year of the decade.

The fact that the 10-year cycle was down last year explains why the economy is sending mixed signals in 2015.  Consumer spending has noticeably slowed this year, as the latest retail sales figures have shown.  Another sign that willingness to spend right now is at a low ebb can be seen in the recent appeal for donations in the wake the major earthquake in Nepal.  According to reports, donors in the U.S. and other Western countries have been slow to respond to a United Nations appeal for $415 million.  Two weeks after the earthquake only 2 percent of that sum had been pledged.  By contrast, in other major disasters such as the 2010 earthquake and the 2013 Philippines typhoon, at least 60 percent of the goal was raised in the first two weeks after the event despite the fact that in both cases the requested sums were much larger.

A similar occurrence took place following the previous 10-year cycle bottom of 2004.  In 2005 the stock market spent several months of that year in a trading range before finally closing the year with a gain.  Moreover, the U.S. economy was slow that year while consumer sentiment was tepid and retail spending was sluggish.  The following year 2006 witnessed the proverbial coming out party for the consumer spending and stock market gains.  I expect the economy will show a similar pattern in the coming year with retail spending slowly picking up traction and showing improvement by the fourth quarter.  Next year should be the “coming out” year for the consumer and retail investor alike.

Consumers have been adding to their savings stash this year, as previously mentioned.  Economists assumed at the start of 2015 that plunging oil and gasoline prices from late 2014/early 2015 would stimulate a consumer buying binge due to the savings in energy costs.  But instead of spending the fuel cost savings, consumers funneled that extra money into their piggy banks.  This creates a rather substantial reservoir of fuel for a future spending binge.

Consumers tend to oscillate wildly between overspending and over-saving.  When they go too far to one extreme, the pendulum goes in the opposite direction.  When consumers are convinced that fears of a global economic slowdown are overblown, they’ll eventually emerge from their shells and start spending and investing again.

I note with interest that the New Economy Index (NEI) is still on a positive trajectory as of mid-May despite a slowdown in the more mainstream retail economic indicators.  NEI broke out of a multi-month sideways trend a few weeks ago and is near an all-time high as of this writing.  Although the indicator has been a bit sluggish since the breakout to new highs a few weeks ago, the chart still points to a positive intermediate-term retail spending outlook for U.S. consumers in the aggregate. 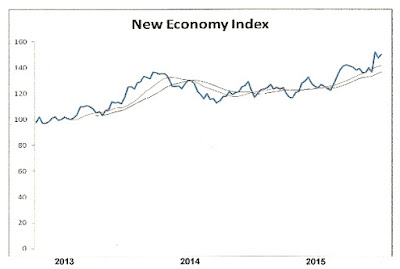 Clearly, investor sentiment among investors is considerably less bullish than it was in the previous two years.  Aside from the residual effect of the 10-year cycle bottom, central bank monetary policy can also be blamed for this.  So far, 2015 has been marked by extreme apprehension on the part of traders and investors as the U.S. Federal Reserve’s monetary policy is uncertain.  While central bankers in Europe and China are embracing a dovish stance, the Fed seems uncertain as to which policy to pursue in light of conflicting reports on the state of the U.S. economy.  This uncertainty on the part of the Fed is holding the market hostage and is generating unnecessary anxiety among market participants.

The solution to this problem is simple, but the Fed’s current leadership appears clueless to what is required.  A straight-forward statement by the Fed as to whether the central bank will raise interest rates this year or keep them unchanged – yea or nay – is all that’s needed to lift the veil of uncertainty.  I’m convinced that if the Fed made an unequivocal public statement on interest rates for the balance of 2015, it would push a lot of sidelined money back into the market.  For now, though, the market remains hostage to the Fed’s equivocation and lack of decisiveness.

The confused interest rate outlook on the Fed’s part is nothing new, though.  The same thing was witnessed in the previous Year Five of the decade in 2005.  The Federal Reserve under Chairman Greenspan’s leadership had embarked on a campaign of rising interest rates starting in 2004, and by 2005 the rising rates were generating uncertainty on the part of investors.  Yet the effect or rising rates – and the initial uncertainty it generated – gave way to a desire to purchase equities as a hedge against a perceived inflationary trend.

Rising interest rates always create apprehension at first, but this uncertainty gives way to the widespread belief among investors that the economy is on the mend since interest rates are trending higher. For this reason it will be important to monitor the progression of the 10-Year Treasury Yield Index (TNX) in the coming months.

If market interest rates have indeed bottomed (as the long-term inflation/deflation cycle suggests) then we should eventually see higher bond yields in the coming year.  This in turn would send the message that the economy is definitely improving and would also remove all reason for equivocation on the part of the Fed.
Posted by Clif Droke at 10:14 AM

Sell in May and go away?

The theme of “bad news is good news” continues as several economic reports weighed on investor sentiment.  Recent reports have been disappointing, but this has also served to bolster investors’ belief that the Fed will respond to the weak data by passing on an interest rate increase.

A Wall Street bromide tells investors to “sell in May and go away.”  The rationale behind this adage is that the stock market historically posts its best performance between the months of October and April.  According to Stock Trader’s Almanac, “A $10,000 investment compounded to $578,413 for November-April in 57 years compared to a $341 gain for May-October.”  While May-October period is statistically less impressive in terms of overall percentage gains in most years, this isn’t always the case.  It should also be noted that the “sell in May” aphorism is deceptive; indeed, some of the most impressive market rallies of the last 20 years have occurred in the summer months.

According to our friends at Stock Trader’s Almanac, the period between May and June was a “disaster area” between 1965 and 1984 with the SPX down 15 out of 20 Mays.  However, between 1985 and 1997 May was the best month with 13 consecutive gains, gaining 3.3% per year on average.  Since then the record has been volatile with a mixture of up and down Mays.

The reason why the May-September period tends to be weak compared to the October-April period is that interspersed between the impressive summer rallies are periods of sometimes wild volatility.  The classic case in point is 1998, which witnessed a meteoric rally in June-July before a nasty spill in August-September.  A more recent example would be the June 2007 rally to new highs in the SPX which was followed by a harrowing sell-off in July-August.

With that said, are there reasons for believing that this year’s May-October period will break the mold of underwhelming stock market returns?  Yes there are, and the biggest reason is that this is the phenomenal “Year Five” of the decade.  The fifth year of the decade has historically always been a winner for stocks and the reason is simple: the 10-year cycle always bottoms late in the fourth year.  The subsequent lifting pressure in the following year virtually guarantees a buoyant stock market, which accounts for the winning tendency of the fifth year.

This time around there is the added benefit of several longer-term yearly cycles also having bottomed late last year, which means those cycles are now in the up phase in 2015.  This is one reason why stocks have stubbornly refused to decline in a meaningful fashion so far this year.  There’s simply too much of a cyclical upside bias, which in turn has counteracted the negative U.S. and global economic developments this year.

There are also other reasons for believing that we could witness a surprising rally at some point in the coming months.  Consumers have been adding to their savings stash this year.  Economists assumed at the start of 2015 that plunging oil and gasoline prices from late 2014/early 2015 would stimulate a consumer buying binge due to the savings in energy costs.  But instead of spending the fuel cost savings, consumers funneled that extra money into their piggy banks.  This creates a rather substantial reservoir of fuel for a future spending binge.  Consumers tend to oscillate wildly between overspending and over-saving.  When they go too far to one extreme, the pendulum goes in the opposite direction.  When consumers are convinced that the fears of a global economic slowdown are overblown, they’ll eventually emerge from their shells and start spending and investing again.


The fifth year of the decade tends to follow the same basic script each time, and this year (to date) has been no exception.  While the stock market tends to outperform in the fifth year, consumer spending tends to be subdued and the economy sometimes even skirts recession (without actually entering it).  That script is being played out again in 2015, but as with previous fifth years the cautious attitude of consumers and investors turns to optimism when they realize their fears are without merit.  The stock market is telling us that despite the economic potholes here and there, the 6-year recovery trend remains very much intact.
Posted by Clif Droke at 1:28 PM